Denver Post: Dale Chisman's four-decade legacy of scribbles, swishes and swirls on display in Denver
... this retrospective leaves no doubt that he was a major painter who deserves to be honored and remembered. {read full review}

Denver Post: Winter Arts Preview - Fine Arts
Thursday through Feb. 27, "Dale Chisman in Retrospect,"
RedLine, 2350 Arapahoe St. This retrospective tribute to one of Colorado's most accomplished abstractionists will feature 30 paintings from 1978 through his death in 2008, including loans from the Denver Art Museum and Kirkland Museum.

WestWord: Ten artists who left their mark on Colorado in 2010
Dale Chisman: Though Chisman died in 2008, his work continued to be part of the scene as demonstrated by the strong show in his honor presented at Z Art Department. One of the most important artists to have ever worked in Colorado, Chisman's abstract expressionist-inspired paintings set a high standard. Chisman had a lot of strengths, notably his keen eye for color, and his instinctual sense for asymmetrical yet balanced compositions. 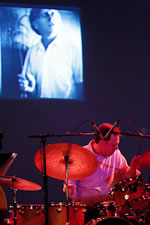 Painters from Vermeer to Picasso have celebrated music-making. Abstract expressionism is jazz played with a brush; Mondrian made boogie woogie out of squares and stripes. But musical homages to painting are much rarer. Pictures at an Exhibition, of course. Dave Brubeck’s Miro Reflections and all those paintings on his album covers. Donny McLean’s little paean to Van Gogh. And…?

Seattle drummer/composer Matt Jorgensen helps even the exchange with his new album Tattooed by Passion, which debuted Tuesday at the Triple Door as part of the Earshot Jazz Festival, and will tour next year. “Music inspired by the paintings of Dale Chisman,” reads the subtitle, and familial affection suffuses the project: The late Chisman, who made his mark in New York and then returned to his native Colorado and led an abstract-painting renaissance there, was Jorgensen’s father-in-law. {continue reading ...}

'Parallel Lines' and dueling documents
by Mary Voelz Chandler (InDenver Times)
Pirate: Contemporary Art is all lit up with striking art right now, thanks to the effort of artists who wanted to pay tribute to the late Dale Chisman ... Finally, taking up most of the wall to the right are the works by Polanco, with their complicated tangles of line and color, Chisman’s striking yellow and black acrylic on canvas Jerusalem, above, as well as pieces that show a mix of the two men’s approaches, from Chisman’s broad stroke to Polanco’s more precise lines and forms.


Chisman's death leaves a void
By Mary Voelz Chandler (Rocky Mountain News)
When I began writing about art 15 years ago for the Rocky Mountain News, there was no question who I'd focus on first. It had to be Dale Chisman, whose work I had admired even before art became my work. For one thing, this accomplished artist created abstract paintings and works on paper, art that pulled me in like a cat to cream. For another, Chisman had two important shows going on, one at what was then called the CU Art Galleries, the other at the (sadly) long-defunct Grant Gallery on Market Street in Denver.

Dean of Colorado abstraction Dale Chisman dies after a long illness
By Michael Paglia (Westword)
Without question, Chisman was one of the most important artists to have ever worked in Colorado. And though he was only in his sixties, he provided a bridge to the artists of the mid-twentieth century, because he had been their student. He'd studied with the late Martha Epp at North High School, and later spent a summer working with Mary Chenoweth, now also deceased, at Colorado College. He received both his BFA and MFA from the University of Colorado in Boulder, but left the area for many years, living for a time in London and for many years in New York before he returned to Colorado in the 1980s, and almost immediately established himself as a local master.

Abstract intrigue:
A show celebrates the worlds envisioned by Dale Chisman
By Kyle MacMillan (Denver Post)
Unlike portrait or landscape artists who endeavor to re-create the world around them, abstractionists invent their own visual worlds. It is not easy. Dozens, maybe even hundreds of artists in Colorado pursue such nonobjective art, yet only a few have built a truly distinctive body of work and achieved real national recognition.

One is Dale Chisman, whose 3 1/2-decade career is being celebrated through Jan. 14 with an exhibition at the Rule Gallery that combines five of his early New York paintings, from 1975-78, with eight recent works.

"There is always some kind of surprise,” Payton said of his work. “It’s not rote. So many artists get kind of formulaic, and he doesn’t. It just continues to be impressive.” Cydney Payton, director-curator of the Museum of Contemporary Art in Denver.

Dale Chisman's impressive career is on display at Rule.
By Michael Paglia (Westword)
Chisman has a dead-on instinct for putting colors together and for assembling forms. He does both of these things instinctually, not knowing how his paintings will come out until the end. The results are almost always brilliant and beautifully crafted.

That's because I was so impressed by his paintings, where he created his own vocabulary of symbols, expansive works where every mark was just so (and just so important) in the composition, and where there was so much going on beneath the surface of each painting. I could fall into them for hours.